(Three quarters failed to be written up, so it’s a bigger leap than last posts…)

From one I was certain: my 6h race I did in July.
This was one of my major goals for 2015 and it went … well enough (click the link for an elaborate review.

The plan was doing another ultra somewhere near december, but starting from mid November sickness and lack of motivation got the better of me, so it seemed for a while I wouldn’t be running another ultra soon.
But suddenly an event called ‘Warmathon’ appeared, this was 5h of running in every province’s capital.
I wanted to join in Brugge, but did’t know my current form… However I wanted to run the full 5h, even though I decided to take on a slow pace. So last monday I ran about 52km (See Strava). I plan to dedicate a full post to this one in the near future…

Hooray, according to Endomondo I have now 2646km (~1644 miles), so not only did I make it, I feel like I’ve crushed it.
Very very happy with my progress across the years.

July 11 I ran the 6h of Aalter and ran the furthest and longest time I ever did for now.
Separate post here with all the details.
Still very proud of this achievement!

I did the last one with Trail Du Mont and did it again with Trail Des Fantomes in August.

Not a goal, but notable:

PB Half Marathon ~1:30 at the end Of October with my brother.

Although I always think I don’t run a lot of races, it seems that my 2015 was filled with races I’lll remember for a very long time!
Running-wise it was DEFINITELY a great year.
Still thinking about the 2016 goals, so it could be they only get written up after New Year…

Did you achieve (almost) everything you wanted to achieve in 2015?
Why (not)?
Be sure to link me up in the comments!!

The wish lists were filled with stuff, but not a lot was running related. As far as running goes I usually buy what I need instantly.
“Luckily” my trusted ear buds started breaking down about a month ago, so I asked new ones, with improvements: remote control to play next song and volume control. I like random playlists provided by Google Music but sometimes they can give songs I really don’t want to hear during a run.

A lot of music joy coming in the future 😉

Second gift was something I could not yet bring myself to buying because it was too expensive: ideal for a want-list 😀
A soft flask. It’s the same fabric as a Camelbak and you can drink from it by pressing the bottle and biting the valve, so no tipping your head backwards.
It takes the form of your hand and in your backpack, which is much more comfortable than storing a hard PET bottle against your back. 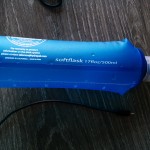 Once it’s empty it practically takes no place to store it and it’s reusable, so the environment is happy as well.
I’ll enjoy this one.

What did you get for your Christmas? Running gear? Other handy stuff?

A lot of diners, a lot of christmas shopping, a lot of spending time outside the own home.
Christmas time is a nice time, but busy none the less.
I felt like I was living out of my car, everything for my daughter just was stashed in there and stayed there for four days in a row.

But I enjoyed every minute of it.
Because of all the food and get-togethers, the running was put on hold (holiday break you know), but yesterday I managed to go running for about 15km (little under 10 miles) together with my brother.
It was running on unknown territory with a lot of talking. Very relaxed way to get some mileage done between all those big meals.
So short update, because other chores and family is waiting, but I wanted to check in to let you know I’m ok and see how you all are doing 😉

Did you enjoy your Christmas week? Did you get some running done?

Very short post today, just wanted to wish you all a very merry christmas.
Enjoy the company, the food, the family, the relaxed day and maybe even a run in some crisp clear air!

Today is Race Day! As you can see in the right sidebar it’s a christmas Run @ Bruges.
I ran this last year and set a PB on the 10k. Jitters are already coming, because I hope to accomplish the same today.
Setting a goal is important for me, but this will be a toughy. The course has a lot of twists and turns, goes over a lot of cobbles and has bottlenecks.

The weather isn’t helping either, strong wind with chance of rain. Chances are that the surface might be slippery.

But hey, I’ll stick to the plan anyway today:

I’m lucky my daughter slept through the night last three days, so now excuse there.

Next race will be a 10k run in the nice city of Brugge (Bruges) the 12th of december.
I participated last year in this race and really liked the nice setting. It’s running in an almost medieval setting with Christmas decorations everywhere.

The organization could be better, because there are quite a few narrow streets and the start is just *pang* … EVERYONE STARTS RUNNING.
With a growing popularity and more than 2300 starting for the 10k (there’s a 6k as well), this means bottlenecks all over the course.
Last year I managed to speed up in the start so this didn’t bother me and I even got a PR out of it last year. (More of that in a later post)

This year they will be adding a first wave for the first 150 finishers from last year and being #86 myself this means a more comfortable start.

I hope pinching off a few seconds of my PR set last year and ending (just) below 39:30.
My heart already gets pumping only writing about it. 😉

Do you have any races planned in the near future? Tell me!

This website uses cookies to improve your experience while you navigate through the website. Out of these, the cookies that are categorized as necessary are stored on your browser as they are essential for the working of basic functionalities of the website. We also use third-party cookies that help us analyze and understand how you use this website. These cookies will be stored in your browser only with your consent. You also have the option to opt-out of these cookies. But opting out of some of these cookies may affect your browsing experience.
Necessary Always Enabled
Necessary cookies are absolutely essential for the website to function properly. This category only includes cookies that ensures basic functionalities and security features of the website. These cookies do not store any personal information.
Non-necessary
Any cookies that may not be particularly necessary for the website to function and is used specifically to collect user personal data via analytics, ads, other embedded contents are termed as non-necessary cookies. It is mandatory to procure user consent prior to running these cookies on your website.
SAVE & ACCEPT