After my Trail Des Fantômes I took a week off (although I’ve done some small runs that week).
After that it was a week of work and decent running (70k week) and lastly last week I took another week off without running. I got back Friday and did a 2h sloooow run on Saturday. Someone I know went on a 6h solo run and asked a bunch of people for support.

So all this writing is mainly to show that resting can help.
Yesterday I went on my scheduled run, but because there was quite some wind I decided to do a Zone2 run instead of a Zone1 run (more on my zones here…).
In my Z2 runs I normally aim at a 4:44m/km pace (~7:37min/mile) and from the start I dove under that.
Even after 5km it was still going great despite it was headwind. I knew I would have the wind in my back going my back so I was hoping for a more than decent run.

Going back I started with about 4:22, so 22seconds faster than aimed.
Some quick counting showed I could manage a half marathon under 95 minutes if all went well. So I decided to add about 5 minutes to my training and I got my half marathon in 1:34:21.
According to Strava this is my second best half marathon ever!

(See it on Strava or Endomondo) 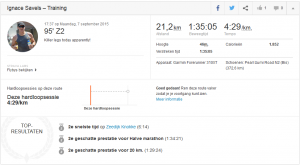 So do you ever run an awful lot better than you’d expect?
Has previous resting something do to with it then?

Taking What I Can…

This website uses cookies to improve your experience while you navigate through the website. Out of these, the cookies that are categorized as necessary are stored on your browser as they are essential for the working of basic functionalities of the website. We also use third-party cookies that help us analyze and understand how you use this website. These cookies will be stored in your browser only with your consent. You also have the option to opt-out of these cookies. But opting out of some of these cookies may affect your browsing experience.
Necessary Always Enabled
Necessary cookies are absolutely essential for the website to function properly. This category only includes cookies that ensures basic functionalities and security features of the website. These cookies do not store any personal information.
Non-necessary
Any cookies that may not be particularly necessary for the website to function and is used specifically to collect user personal data via analytics, ads, other embedded contents are termed as non-necessary cookies. It is mandatory to procure user consent prior to running these cookies on your website.
SAVE & ACCEPT
%d bloggers like this: